Everything you need to know about Frozen 2

Frozen fever might not be as high pitched as it once was, but it’s certainly not gone, not by a long shot! In fact, if some of these rumours are true, we could be returning to the dizzying Frozen mania of 2013, 2014 and even 2015!

So what do we know?

First off it’s definitely happening. If you thought it was all just a rumour and that you’ll never have to listen to the sounds of ‘Let It Go’ again, unfortunately you’re out of luck. While the exact release date is unknown it’s widely expected to be in 2018. It should also be no surprise that all your favourite characters will return, voiced by their real life counter parts. That said there are conflicting rumours whether Idina Menzel will be back to voice Elsa. We’re also likely to get new costumes and a whole new album, which will make family car journeys that extra bit fun!

Anna to be the villain

There are multiple rumblings throughout the web that Anna could be transformed into a more villainous role.  GameNGuide have reported that Anna gets her own fire based powers that manifest during the film. These powers lead her astray somewhat, causing considerable tension with her sister. This could be interesting, as Elsa was originally rumoured to be the villain in the first film.

Disney is the very essence of living happily ever after, and surely won’t kill off their most popular character. However, there are growing rumours that this could be the case. It stems from an E!News interview with Idina Menzel (who plays Elsa), stating that her character might fall of a cliff! Take this with a pinch of salt, although some speculate that it’s Anna who pushes her off, supporting rumors that her character has turned more evil.

Disney are renowned for dropping subtle hints that there’s a shared universe, but so far haven’t pursued a full crossover. Frozen 2 could be about to change this. The Radio Times reports on a new theory that Elsa and Rapunzel (from the film Tangled) are actually twin sisters, and that she’ll be making a prominent appearance in the film. The theory that Frozen and Tangled share the same universe isn’t new (some believe that Elsa and Rapunzel are cousins). It stems from a (very) brief scene of Anna singing ‘for the first time in forever’ which shows her coming face to face with Rapunzel (with her now short hair). There are even some theories that believe that Tarzan will make an appearance! If these theories are true it opens up a whole new shared universe and crossover possibilities.

Unusually true love didn’t fully blossom in Frozen 1, but this could all be about to change. While plenty of people expect Anna and Kristoff’s relationship to grow, it’s actually Olaf that will find true love with a snow woman. Olaf is one of Disney’s most beloved characters, so it would be great to see him live happily everafter.  Where this leaves Elsa we’re a little unsure, perhaps she’ll hit it off with Tarzan!

While Disney is keeping the lid firmly shut in terms of official announcements about Frozen 2, it’s inevitable popularity is no doubt certain. This could be good or bad, depending on whether you liked the first film. Whatever the case it looks like we should all get ready for another round of high pitched Frozen mania. Expect Frozen parties, singalongs, cinema trips and lots of reruns! 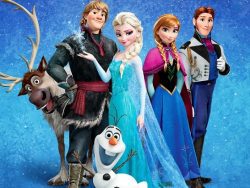